What’s up with the name of the Cleveland Mashie irons? They’re a new-for-2012 hybrid/iron combo set, but isn’t a “mashie” a really old type of club that golfers used decades ago?

Well, yes – long ago, clubs were referred to by names, not numbers like they are today. For example, back then there wasn’t any such thing as a 9-iron – that club was called a "niblick" (who knows how THAT got started). And a "mashie" was equivalent to what we now call a 5-iron. I’m guessing the name "mashie" came from a comment someone made during a long-ago round - like, "hey, buddy - you really mashed the ball that time!"

But Cleveland Mashie irons are far from being part of golf’s past, and they don’t look or play anything like those old clubs. Instead, these irons are a technologically-sophisticated “combo” set that includes a 3-, 4- and 5-hybrid along with a 6-iron through pitching wedge. Gap and sand wedges are available separately.

These are maximum game-improvement clubs, primarily designed to help average and high handicap players. According to Cleveland Golf, the story with these clubs begins and revolves around what the company calls its “Gliderail™” sole design. 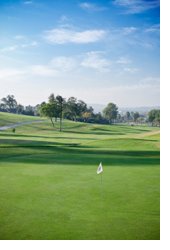 The company believes the elevated “rails” and small, central “keel” on the soles of the Mashie hybrids (the Gliderail™ design) promote higher, faster ball launches and reduced turf drag, increasing distance and improving the clubs’ versatility. Being able to hit the ball high and long from different types of lies is vital to anyone’s game, but it can make a huge difference if you’re a beginner or even an average player. Who wouldn’t score better and enjoy the game more if they hit the ball longer and higher? I know I would, and I bet you would too!

Hybrids that help you get out of the rough and are easier to hit than your long irons can make a world of difference to your game. Cleveland introduced its Mashie hybrids in 2011, and in 2012 it included three of them in the new Mashie irons combo set. The face of a Mashie hybrid features helpful bulge and roll, and it has an iron-like profile.

The soles of the cavity-back Mashie irons also have Gliderails™ to help golfers make crisp contact. Whether the ball is on the fairway or in the sand or rough, the Gliderails™ on the irons are designed to prevent digging and reduce turf drag, making higher ball speeds and longer shots possible. They’re also intended to boost the clubs’ forgiveness when you’re hitting from poor lies. The Gliderail™ design becomes progressively less pronounced in the set’s short irons and wedges.

These irons also feature a wide-sole, progressive-offset design, meaning the soles are different for each individual iron and its purpose. Perimeter weighting increases the clubs’ Moment of Inertia (resistance to club face twisting) and promotes accuracy and forgiveness. The progressive soles, Gliderails™ and perimeter weighting mean each club has been optimized for versatility, distance and forgiveness from a variety of lies.

A few days ago, I played a round with a set of Cleveland Mashie irons. The first thing I want to mention is their appearance. They’re actually pretty attractive for maximum game-improvement irons, and I love the retro-style, “sock” head covers (old-fashioned pom-poms and all!) that come with the hybrids.

All the Cleveland Mashie irons – including the hybrids - set up behind the ball nicely and were easy to align properly. They were nicely balanced throughout my swings and made it easy to pick the ball cleanly. The hybrids are easy to hit but they have a pretty pronounced offset. As a result, my shots with the hybrids flew left pretty consistently (they’d be perfect for someone who tends to hit a slice but my normal shot shape is a draw, and these hybrids accentuated it). The irons, on the other hand, were straight and high. Both types of clubs handled our gnarly Bermuda rough pretty well.

I think forgiveness is one of the strong points of the Cleveland Mashie irons. Naturally, I lost some distance on mishits, but the penalty wasn’t excessive. And, my poorly-struck balls still managed to go pretty straight. The distance gapping between the clubs was also excellent.

Long, versatile, accurate and forgiving, Cleveland Mashie irons would be a good option for a beginning golfer, a high-handicapper or (for that matter) a medium-handicapper who wants to score better. The Gliderail™ design technology gives golfers a better chance of striking the ball crisply from different lies. The hybrids have too much offset for me, but that could help slicers tremendously. All in all, I’d recommend the Cleveland Mashie irons for mid- to high-handicappers and golfers who slice the ball frequently or need help getting the ball in the air.

From the Cleveland Mashie Irons review to other golf club reviews.