Why is it so hard to find decent information about ladies golf club sets? I'm a golfer, but I'm also a woman.  And I bet I'm not the only female golfer who feels shortchanged a lot of the time.  Let me give you a few examples of what I'm talking about.

A lot of men refuse to play with their wives or, for that matter, other women.  They think we're too slow and nowhere near good enough to play with men.  The funny thing is, I'm a lady golfer and I can beat at least 80% of the men who play at my home course.

I can think of at least one golf magazine that's specifically written for female readers.  You'd think it would be chock full of playing tips and suggestions for how lady golfers can work around their physical limitations (I'm being realistic here, not sexist - the average woman just isn't as tall or as strong as the average man.)  But nooooooo, that's not what this magazine is all about.  Although it does include a few playing tips (sometimes they seem like they're almost an afterthought), this magazine is packed with information on how to look fashionable on the golf course.  Very expensively, I might add ($300 shorts, $500 tops and the like).  As I said, I'm a lady golfer, but that's not what I'm looking for in a golf magazine for women.  And I bet there are a lot of other women out there who would agree with me. 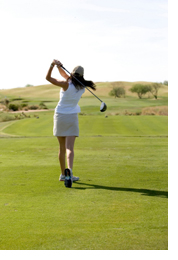 In fact, if you search for "ladies golf" using Google, three of the first four websites that come up sell ladies golf apparel.  How wrong is that?  We deserve information about the game, as played by women, instead of clothing.

And then we have the club situation.  Up until fairly recently, most ladies clubs were not designed for women.  Sure, they often had pink or light blue shafts (oh please...), but in many cases they were nothing but re-labeled versions of men's clubs with men's senior flex shafts.  They simply weren't suitable for most women - their shafts were too long (remember, on the average women are shorter than men), too stiff (likewise, most women aren't as strong and don't swing as fast as men) and their grips were too large (women's hands are usually smaller than men's).

Okay, rant over.  I'm sure you get my point by now.  The time for the world to recognize that women take their golf just as seriously as men arrived quite a while ago.  Fortunately, golf club manufacturers are finally recognizing that fact, along with the fact that women are physically different than men.  Those physical differences mean that women need golf clubs that have been designed specifically for women.   A man wouldn't like it if he was forced to play with ladies clubs, because they wouldn't suit him.  Well guess what?  It works both ways.  Women don't like being forced to play with men's clubs either.

Golf club manufacturers are now coming out with ladies club sets that truly are designed specifically for women.  To accommodate the average woman's shorter height, the shafts used in these ladies golf club sets are typically a bit shorter than the shafts of the equivalent men's clubs.  And, in recognition of the average woman's slower swing speed and comparative lack of strength, the shafts are usually a few grams lighter in weight and more flexible than even the senior versions of men's shafts.  In addition to those differences, the grips used in ladies golf club sets are almost always slightly smaller than the grips on men's clubs.  And, although a lot of ladies golf club sets still come with those (to my eye) unsightly pink or light blue shafts, others are now being made with shaft graphics that are much more visually appealing - black, dark brown, dark bronze and so forth.

All in all, I'm pretty happy with the ladies golf club sets that are on the market today.  They're built with women in mind, rather than being re-labeled men's clubs.  The very popular PING Faith series, which includes the PING Faith driver, fairway woods, hybrids, irons and putters, is a perfect example.  Another example are Nancy Lopez golf clubs (like for instance the Nancy Lopez Torri series) or the Cobra Sapphire set and Callaway Solaire. But thankfully, many other ladies golf club sets are also being made.  We review several of these ladies golf club sets on our website in the hope that we can help our female readers find clubs that have been designed to suit them in the same way we hope to help male golfers.