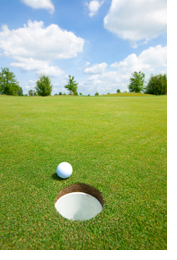 BiO CELL is an unusual name for golf clubs.  Apparently, it refers to technology that makes the faces hotter, along with technology that lets Cobra shift the weighting of the clubs.  Together, they promote distance and forgiveness.

Back in the old days (the late 1990s and early 2000s), Cobra was known for its solid men’s and ladies clubs.  Not the most famous, but always very respectable.  Some big-name professional golfers played Cobras on Tour.  Fast forward to the last few years, and the picture become a little different.  Now, Cobra might be better known for its flashy orange clubs and its connection with the equally flashy Rickie Fowler.  Rickie’s a great guy and all, but Cobra probably wants to be known for more than him and the orange paint jobs.

The clubs come in several colors - black, white, red, blue, orange and so on.  Initially, that made me think Cobra’s getting carried away with the paint job thing.  I was worried about them putting style over substance, focusing less on quality and more on the color schemes.  But after testing a few of the Cobra BiO CELL clubs, I knew I was wrong and I didn’t need to worry.

Yes, there are some purely stylish aspects of these clubs (the color choices), but there’s a lot more to them than that.  The color choices are just icing on the cake.

Every club I tested was a solid performer.  Here’s a quick rundown.

Designed to promote high ball flights, distance and forgiveness, the all-titanium Cobra BiO CELL driver is meant for average golfers.  It, along with the fairway woods and hybrids, features Cobra’s “MyFly8” adjustment technology.  You can adjust the loft in half-degree increments and select a setting that will bias the club toward a draw.  The company’s “SmartPad” technology means the face will stay square despite making a loft adjustment (except if you choose a draw setting).  The distance on my drives was very acceptable, and the sound and feel at impact were satisfying (nothing like Cobra’s “tin can” sound of a few years back).  The driver’s strong point, though, is forgiveness.  I lost some distance and my shot dispersion was greater when I missed the sweet spot, but the punishment wasn’t overly excessive.

The stock shaft is a Grafalloy Project X.  My test club was a beautiful black-on-black (black crown and black face) with an unobtrusive, almost ghostly web-like pattern on the crown.  All in all, it’s an attractive game-improvement driver with decent distance and good forgiveness.

The wood and hybrid I tested both looked good at address.  Both produced a fairly high ball flight and good distance.  And both have built-in game-improvement features.  Like the driver, they’re not spectacular but they are solid performers.

If I had a problem with any of the Cobro BiO Cell clubs, it was the irons.  Mostly because I think they look clunky, chunky, goofy and way too busy.  All kinds of thick bars go every which way on the back of the heads.  There’s nothing traditional-looking about them.  Tungsten weights at the heel and toe of the long irons are meant to make them more forgiving.  Tungsten positioned behind the center of the face of the short irons is meant to make them longer and easier to control.

Do their odd (to me) looks really matter all that much?  I don’t think so, at least not if they help you hit the shots you want.  I’ll deal with their looks if my shots go where I want.  And guess what?  Cobra BiO CELL irons play a lot more refined than they look.  My approach shots were accurate and the longer irons gave me the distance I wanted.

I don’t know whether Cobra BiO Cell clubs are better than others, but they’re legitimate, serious clubs.  They’d give you a lot more than just some extra bling in your bag.

Back to the other golf club reviews.