A Review of the Mizuno JPX-800 Iron Set

You might want to consider the Mizuno JPX-800 iron set if you’re looking for serious irons made by one of the world’s most highly-respected golf club makers –Mizuno USA. I recently had the opportunity to try out the set on my home course, so here’s my review of these clubs. 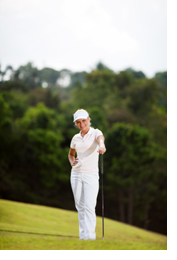 Although most golfers associate Mizuno with the finely-crafted forged irons that many tour professionals prefer, the company also makes great clubs for amateurs like you and me. As a Golf Digest “Hot List” gold medal winner in 2011 and silver medal winner in 2012, the Mizuno JPX-800 iron set is a good example.

According to the company, this iron set is designed for players with handicaps ranging from 8 to 30. I’m about an 11 right now, so I figured I could give them a pretty good test.

First things first – let’s talk a bit about the looks of the Mizuno JPX-800 iron set. I’ve seen these clubs described on some websites as “sex on a stick,” but I prefer “gorgeous,” “classy” or even “serious.” They almost look like player’s irons (although with a slightly wider topline and sole), and that type of appearance can inspire a great deal of confidence. But the design of these irons isn’t the only thing that’s serious about these clubs.

Mizuno designed these irons to be “explosively long” and “amazingly forgiving,” and that means a ton of technology has been built into them. To achieve the maximum allowable limits for energy transfer, they use Mizuno’s “Global JPX Technology” – a combination of its Hot Metal™ face manufacturing process, the company’s “MAX COR Technology” and an innovative pocket cavity.

The Hot Metal™ technique is a process that promotes maximum ball velocity by strengthening the metal of the face, allowing it to be ultra-thin for maximum ball rebound. The MAX COR Technology used in the 4-7 irons provides the highest permissible Coefficient of Restitution (COR) and deepens the center of gravity for enhanced forgiveness as well as distance, while the 8-PW have a deep cavity pocket to provide a high degree of forgiveness. The unique cavity pocket uses a “Power Bar” to enlarge the club’s sweet spot and lower the center of gravity even more, making the club more forgiving across the entire face.

The multi-material cavity badge on the back of a Mizuno JPX-800 iron enhances the club’s sound and feel at impact, but it also adds to its sharp looks and sense of style. A “triple cut” sole is intended to promote solid ball-striking from any type of lie. Finally, the U-grooves on the faces of the Mizuno JPX-800 iron set satisfy the groove-rule changes made by the USGA and R & A in 2010, but they’re designed to generate the right amount of spin on all types of shots. Actually, I thought the short irons produced more spin and bite on the greens than many of the game-improvement irons I’ve tested.

The Mizuno JPX-800 iron set is all about increasing your distance – not a bad goal to have as long as the clubs are forgiving and accurate too. So how do these irons perform out on the golf course?

Several shaft choices are available, but I tried the Mizuno Exsar™ IS4 graphite shaft in regular flex. The clubs look great at address and set up nicely behind the ball. The lofts of the Mizuno JPX-800 iron set are lower than normal (for example, the loft of the pitching wedge is 44 degrees, several degrees lower than standard) so the balls I hit tended to fly lower but significantly longer than what I get with my own iron set. So, I give the distance of these clubs a loft-assisted “A.”

Their accuracy and forgiveness was every bit as good as the best of the game-improvement irons I’ve hit (the ball still flew fairly straight on mishits and the distance loss wasn’t excessive), and the feel was amazing - pure and smooth on well-struck shots, with just the right amount of feedback on poorly-hit balls. I was able to hit the clubs well from a variety of lies, too – fairway, rough, hardpan and bunkers. As far as workability is concerned, I could draw the ball at will, but I found it tougher to hit an intentional slice or fade.

The Bottom Line: Mizuno could have given the Mizuno JPX-800 iron set a catchier name that’s easier to remember. But if you give the clubs a try, you won’t forget the performance they can deliver. These irons can give you superior distance along with good accuracy and forgiveness, but they also give you that famous “Mizuno feel” (not quite up to the level of the company’s forged clubs, but excellent for cast clubs). They’re even suitable for a wide range of skill levels. There just isn’t much to dislike about the Mizuno JPX-800 iron set – they’re great all-around clubs.

From the Mizuno JPX-800 iron review to other golf club reviews.