The Nike Method Concept Putter – Unusual and Controversial, But Does It Work?

Do the controversial looks of the Nike Method Concept putter convert into exceptional performance? Read our review to find out whether the unusual design of this putter delivers the type of putting performance you want and need to lower your scores.

If you’re looking for a new putter and you want one that makes a visual splash, you might want to take a look at this new Nike putter - it does exactly that. But its controversial appearance doesn’t just create some big waves – the unusual design of this club is actually intended to enhance its performance. 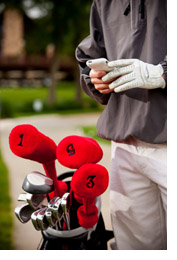 Some people love the way this putter looks, and others can’t stand the sight of the Nike Method Concept putter. There’s not much middle ground here – you either love it or hate it. But beauty is in the eye of the beholder, as they say.

The shape of the putter head is so different that it’s hard to describe. It looks something like a blade putter with a red head, but a heavy, black, D-shaped bar juts out from behind the toe and angles around to the heel. There’s a large “open” space between the black bar and the “blade” part of the head and you can see the grass beneath the club through this open space. The overall look is that of an unusual (some might say radical) mid-mallet putter. I know I haven’t described it properly, but that’s the best job I can do with words. You really need to see the club in person to really get an idea of how unusual it looks.

As I mentioned earlier, this distinctive design is intended to enhance the putter’s performance. The aluminum “blade portion” of the head is colored red to draw the golfer’s eye and provide a sharp contrast to the green of the grass. Because the eye is drawn to the red blade, the black “D-shaped” bar should visually “melt away,” making it seem as though you’re playing a blade putter even though you’re benefiting from the performance of a mallet.

But that’s just the effect of the color scheme of the Nike Method Concept putter. According to Nike, the club is intended to be a forgiving, high Moment of Inertia (“MOI”) putter without being enormous like the “pancake flippers” of recent years. The heavy black bar provides weighting that helps to keep the face steady and online throughout the stroke.

Despite its unorthodox head design, the Nike Method Concept putter uses the same “Polymetal Groove Technology” that the company uses in its other Method Core putters. Alternating soft polymer and aluminum grooves inside a polymer insert are designed to “grab” the ball and start it turning over quickly, reducing the ball’s tendency to hop or skid. They also reduce vibrations at impact to deliver a soft feel.

The lightweight aluminum face (contributing only 1/3 of the head’s total weight) combines with the putter’s heavy steel bar (2/3 of the head’s overall weight) to position the center of gravity low and back. Nike claims that the club’s deep center of gravity not only creates great head stability but starts the ball rolling quickly and encourages players to follow through on their strokes rather than decelerating at or before impact. The overall result is a soft feel, good distance control and an extremely smooth, pure roll.

The Bottom Line: The Nike Method Concept putter is just as stable and forgiving as the largest mallet putters, but the optical illusion that’s created by the contrast between the red blade and the black D-bar portion of the head makes it seem as though you’re playing a blade or small mallet. The putter’s innovative groove system puts a forward roll on the ball extremely quickly, and the head remains stable throughout the entire stroke. Performance-wise, there just isn’t much to complain about with the Nike Method Concept putter.

However, there is the “little” matter of its looks. In fact, no other putter on the market looks like the Nike Method Concept putter. For one thing, very few red putters have ever been made. But the presence of the D-shaped steel bar adds even more controversy to the Method Concept’s appearance. You may look down on it at address and struggle with the way it looks. If so, it’s probably not the right putter for you, because confidence in your putting is essential. But, if you can get around its unusual looks and you want the performance of a high-MOI putter, try rolling a few balls with the Nike Method Concept putter. You just might discover its looks don’t seem so radical after all, and you might even decide you’d really like having one in your bag. If so, the MSRP is around $199.