Nike Method putters have been around since 2009, but the Nike Method Core putter puts a new twist on the Tour-proven Method’s technology. The pros have used various models of the original Nike Method putter to win several majors and numerous other tournaments, so you might be wondering how the technology could be improved. 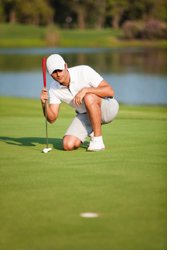 Well, this putter isn’t really meant to improve the original version’s technology – but it is intended to make the technology more affordable. The original Nike Method putters cost around $250. Now, price doesn’t really matter to the pros because they usually get all their golf clubs and other equipment for free. But a $250 price tag can deter a lot of us “regular” folks. At a much more affordable retail price of $130, the Nike Method Core putter makes the Method technology available to just about everyone.

So, did Nike make any compromises in performance or quality when it created this less expensive putter? Or would one of these putters make a fine addition to your bag? Read our review below to see what we think.

The hallmark of the original Nike Method putter face is what Nike calls “Polymetal Groove Technology.” You can think of this technology as being two sets of face grooves – a set of soft polymer face grooves that raise the launch angle, and a set of secondary metal face grooves that promote a fast forward roll. The intention is to provide the same launch angle as other putters despite a loft that’s two degrees lower to reduce skidding and promote stability and distance control. Nike must be onto something, because the original Method putters have been very successful on Tour.

Polymetal Groove Technology is also the hallmark of the Nike Method Core putter – with some significant differences (understandable, since the Method Core does cost $120 less than the original version). To begin with, the head of the original Method putter is made from precision-milled stainless steel, while a Nike Method Core putter head is cast steel. And, the polymer grooves on the original version are on the face itself (direct-injected, no insert), but they’re built into a red aluminum face insert on the Core models. Despite the differences in how it’s created, the technology is essentially the same in both models: the upper portions of the grooves are partially filled with polymer to provide a soft feel, but the unfilled lower portions "grab" the ball to start it rolling quickly.

The face insert of the putter does provide a couple of advantages over the original model’s design. In addition to lowering the price of the club because it’s a cheaper manufacturing process, the face insert allows the Polymer Groove Technology to be used on a wider range of head shapes in the Method Core. As a result, there are five versions of this putter – three different blade-style putters, a full mallet and a mid-mallet.

I like the looks and feel of the original Nike Method putters more than the Nike Method Core putter I tested (the MC-4i mid-mallet). There’s something about the red on the face insert that I just don’t care for – the contrast between it and the rest of the face is too noticeable for my tastes. You might like it, though, and it does add a touch of panache. I also thought the feel of the Nike Method Core putter was a bit softer compared to the original model. I did like the Core’s dark brushed-nickel finish.

The MC-4i model I tested was a center-shafted, face-balanced mid-mallet. I’ve always loved center-shafted putters because my putting stroke is essentially straight back-and-through, with virtually no arcing. The head has an attractive shape that definitely appeals to my eye.

It put a smooth roll on the ball, although I have to admit I was playing really well that day and shot a 73. Or maybe I shot the 73 because I was rolling the ball purely. Who really knows what makes a given round better than some of the others? At any rate, there wasn’t any skipping or hopping with the Nike Method Core putter – the ball hugged the greens nicely and tracked straight and true down the line. Distance control was excellent, especially considering I was playing an unfamiliar putter.

The Bottom Line: Overall, I felt that the Nike Method Core putter rolled the ball consistently, accurately and smoothly. That’s all anyone can ask for in a putter. Apparently there’s something to the company’s Polymer Groove Technology, and despite being almost half the price, I liked the Method Core almost as much as I liked the original milled version of the Method putter. Nike deserves kudos for making its Tour-proven technology more affordable and therefore more accessible to us “regular Joes and Janes.”

From the Nike Method Core Putter to other Nike golf club reviews.