The PING Anser Putter Review:  A Past and Future Classic

There's no question that the original PING Anser putter was a classic. Designed by PING founder Karsten Solheim, first sold in 1966 and then patented in 1967, the PING Anser quickly became one of the most influential, recognizable putters golf has ever seen.

Among other things, the original PING Anser was responsible for establishing what would become the classic design for "traditional" blade putters. At the time, its cavity back, low center of gravity and offset hosel (intended to give golfers a clear line of sight on the face) were revolutionary, but they have come to be recognized as representing one of the most effective putter designs of all time. During its time in the limelight, the original Anser became the "winningest" putter in history, with 500 professional wins under its belt. Time after time it produced putts that rolled true, and its feel was superb. 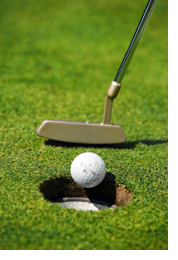 It wasn't for the faint of heart, however. The PING Anser putter wasn't oversized and it didn't have a huge sweet spot so it wasn't terribly forgiving. Mastering it took a consistent, practiced motion.

That was then. The original putter hasn't been made for quite a while now. But PING has resurrected the name and refined the design of its trailblazing putter several times since it put the first PING Anser to bed. As a result, several versions of the PING Anser putter exist today. And, if imitation truly is the sincerest form of flattery, then Karsten Solheim (may he rest in peace) should be extremely flattered regarding the design of the original putter. It's been imitated (to the extent legally possible) by dozens of putter designers and manufacturers - even the renowned Scotty Cameron has designed an Anser-like putter. In fact, the PING Anser putter probably holds the unofficial record for being the most copied design in putters.

In short, the technical advances incorporated into the original club are now almost 50 years old, but they're still being used successfully today.

Despite its age, the beloved original PING Anser putter is still being used on the world's greens today. Golfers looking for used putters could do far worse than buying one of these classics. Lucky golfers can sometimes find them on www.eBay.com or www.amazon.com. But, if you prefer buying a brand-new putter, you might want to consider some of the newer models.

For example, PING introduced the Karsten Anser putter about five years ago (the Karsten line also included versions of the classic PING Zing and Piper putters). Priced at under $100, it was a true bargain. Unlike the original PING Anser putter (which had no insert), the Karsten version of the Anser used an elastomer insert in the back cavity (behind, not on the face like so many modern putters) to promote better feel while retaining the solidity and dependable performance of a steel-faced putter.

Other recent versions of the PING Anser putter, while retaining the classic look, have featured various updates to create a better balance and make them more forgiving than the original Anser. For example, PING is currently making a line of milled 303 stainless steel-faced putters it calls the Anser Milled®. There are seven models of this putter in this series, but they strongly resemble each other and the differences between them are primarily in their neck and hosel designs, which affect the putters' balance. One of the Anser Milled® putters (the Anser 5) is built for a straight back-and-through putting stroke, while four others are designed for a slightly arcing putting stroke. The remaining two Anser Milled® putters (the Anser 4 and 6) are built for strokes with even bigger arcs.

There are also 2 Anser putters in PING's current Karsten® 1959 line - the Anser 2 and the Anser X. Both of these putters use the classic Anser design with a soft elastomer insert added to the back cavity to provide a soft yet solid feel and consistent performance.

With nine Anser putters in its current lineup, PING is clearly convinced that the Anser design can help a tremendous number of golfers. And as the most frequently-copied putter design in history, it's obvious that a number of other putter manufacturers are convinced too. A PING Anser putter doesn't have a lot of fancy bells and whistles, but its classic look will deliver solid performance.

From the PING Anser Putter Review to other PING putter reviews.