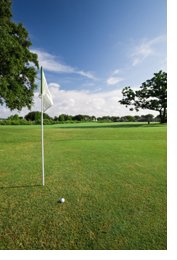 It’s understandable if you only associate the Anser name with the blade-style putters made by PING Golf. After all, PING’s been making Anser putters for a lot of years. But now there’s more to the Anser name than just putters.

I know PING is famous for its casted clubs, but it’s been branching out lately. Last year PING brought out its first forged irons, called the Anser. And now we have a new high-quality forged wedge to match and extend those irons. The wedge is also called the PING Anser.

The first thing you might notice about the PING Anser wedge is its looks – the club is beautiful in an industrial-chic sort of way. But it also has a heavy tungsten toe weight (balanced by a longer-than-typical hosel) which enlarges the sweet spot, adds forgiveness and positions the center of gravity to promote lots of spin and penetrating ball flights. The head is forged out of soft 8620 steel, and the club has that delicious forged feel and feedback. The design features a face that’s thickest in the impact area and a rear stabilizing bar to promote consistent ball-striking. There’s no cavity weight in the back because the extra-long hosel and tungsten toe weight make one unnecessary.

Much like putters, wedges are “personal” clubs. Every golfer has his or her own subjective idea of what makes the perfect wedge, because every golfer is different from the next. While you’re shopping, the key is to find the wedge(s) that suit your swing and your game.

Looks are subjective, but they’re more important than you might think. You’ll feel more confident during your swing if you like the way a club looks at address. It works the opposite way, too – if you dislike the looks of a club you’ll tend to not swing it as well.

Feel and sound are closely related, and they’re also important and somewhat subjective. But versatility might be the most important characteristic of any wedge. Your wedge must be able to handle a variety of shots and situations.

So, here are my admittedly personal impressions of the 56-degree PING Anser wedge I tested. As you’d expect from a lofted club, ball trajectory was high. Distances on my full shots were pretty consistent, with only five or six yards of variation. Accuracy on full shots was excellent. Feel on impact somehow managed to seem crisp and buttery-soft at the same time.

When I tested the PING Anser wedge, I was also pleased by the club’s versatility. I was able to hit full shots from the fairways (tight lies and otherwise) consistently well, but it also worked well on partial shots and chips. The Bermuda rough here in Florida can give you some very difficult lies, but I was able to lay open the face of the PING Anser wedge and pop out the ball - a shot that’s in some ways similar to a bunker shot. And speaking of bunker shots, I had no difficulties from the sand. The PING Anser wedge even handled hardpan, which is a lie I normally find troublesome. I can’t say the club spun the ball like a top, but overall I was pleased with the way the ball checked up on the greens – no worse or better than other wedges with conforming grooves.

My one criticism relates to the club’s fairly wide sole. I’ve always liked narrow soles, but many golfers like wide soles so your mileage may be different.

The Bottom Line: The PING Anser wedge plays like a forged game-improvement club. Normally, “forged” and “game-improvement” aren’t used in the same sentence, but it seems appropriate for this wedge. I’d describe the performance and feel as being like a muscleback “player’s club” - but the forgiveness is more like what you get with a game-improvement cavity-back. What really impressed me was the club’s great balance, high level of craftsmanship, forgiveness and, above all, its versatility. It’s an extremely well-made club that was a joy to play because it performs all day long regardless of the type of shot or lie.

From the Ping Anser wedge review to other golf club reviews.