The PING Craze-E Putter Review:  Is it Effective or Just Crazy?

PING is giving amusing, creative names to some of its putters. In addition to the PING Craze-E putter, we have the PING Wack-E® putter, the ½ Wack-E® (is it only half as goofy as the "full" Wack-E®?), and the Hohum®, Pickmeup® and Y Worry® (three of my all-time favorite putter names). The company might be naming them this way to make the putters more memorable (remembering a name like "Hohum®" would be a lot easier than remembering a series of dry numbers like "E-33" or "MC-2i" (two of Nike's putters). Of course, the company might also just be keeping everything lighthearted. Either way, it's working.

The name of the PING Craze-E putter is certainly distinctive, but so is the club's appearance. In fact, getting used to the unusual looks of this putter might take some practice time. I also learned that some practice might be needed to develop a smooth stroke with this putter, so don't put it back on the rack at the shop until you've spent at least a few minutes with it. In other words, don't give up on the PING Craze-E putter too quickly, because you might end up liking it.

Some people say the PING Craze-E putter looks like a spaceship. Others say it resembles a pancake flipper. To me, it looks something like a blade putter with a vaguely D-shaped attachment jutting out at the rear. 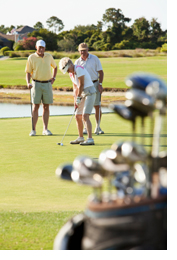 There have actually been several different Craze-E putters over the past few years. Previous versions included the original Craze-E and the popular iWi Craz-E®, which had an optional user-adjustable weight kit available. The company keeps making updated versions, so I figured there must be something to these eye-catching putters.

The main PING Craze-E putter today is a member of the company's Karsten® 1959 series, although there is also a PING Faith® Craze-E putter designed specifically for lady golfers. Both versions are faced-balanced, high MOI putters that use an elastomer insert (PING calls it a tuning port) behind the face to give them a firm but solid feel at impact. The ladies Faith® Craze-E putter also has a face insert to promote a smooth, consistent, predictable roll and a soft but solid feel. The Karsten® 1959 Craze-E, on the other hand, uses a traditional steel face to provide consistent results.

Recently, I went to a Golfsmith store to hit a couple of iron sets I've wanted to review. While I was there I also tried out some putters, including the Karsten® 1959 version of the Craze-E I'm reviewing here.

As soon as I looked at the putter, I suspected its unique shape would have pros and cons. The shape is different than what many of us are used to, so until you've made a mental adjustment it can be somewhat distracting. Once I did, I began to appreciate its virtues. In fact, I can see how a PING Craze-E putter could help golfers putt better.

First, this is a putter that is incredibly easy to line up properly. It has a large sweet spot so if your stroke is slightly off, you won't be penalized much, either directionally or distance-wise. I also really liked the responsive feel at impact - it gave me just the right amount of helpful feedback.

Its low center of gravity promotes striking the ball properly and produces a pure, true roll. I have an essentially straight-back-and-through putting stroke, so I appreciated the face-balancing of this putter (face-balanced putters are designed to work well with straight putting strokes). Those of you with an arcing stroke might prefer a mid-hang or toe-down putter because that balance works better for your type of stroke.

The PING Craze-E putter has the kind of nice, tacky grip I prefer. It helps me avoid tightening up and grasping the club too firmly, which helps keep me online.

I even started liking its appearance once I got used to it. In fact, its looks and the accuracy I was getting inspired a great deal of confidence while I was standing over the ball.

The Bottom Line: There's not much to dislike here - at least once you get used to the name and looks of the Ping Craze-E putter. Nice feel, easy to align, very forgiving and a pure roll. All in all, this is a solid PING putter despite the crazy name.