To my mind, these R9 irons are some of the most beautiful clubs I’ve ever seen.  Tastes in club appearance vary from person to person, of course, but this particular set made my jaw drop the first time I saw them.  And, I think their clean, elegant looks do a lot to inspire confidence (couldn’t we all use a little more of that?).

TaylorMade R9 irons are cavity backs, but somehow they make you suspect that you’re actually looking at blades.  Who among us wouldn’t love to be able to play a set of player’s blades?  And even if we lack the skills to play blades, wouldn’t it be great to at least look like we are?  Because they look great in the bag as well as at address, some bragging rights are involved when you’re playing these R9 irons. 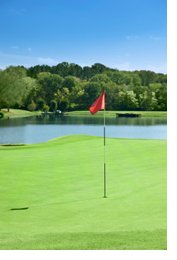 So, I guess you get the picture about their looks – I think they’re terrific.  But how do the clubs perform?  That’s the most important thing, after all.

Well, despite their elegant looks, TaylorMade R9 irons are cavity backs.  That means that important game-improvement features are built in, even though they’re meant to be played by average to better golfers and they look like a professional’s set (some pros did play them after they came out in 2009).  In fact, a ton of advanced, performance-enhancing technology is designed into these beautiful clubs.

Any cavity back irons, including TaylorMade R9 irons, will be more forgiving than blades.  Really, though, these clubs are all about performance and distance.  According to a TaylorMade representative, they’re “aimed at the technician” and have “a player’s shape with a clean and conventional look.”  The result of the technology that’s built into the clubs is “an iron that’s phenomenally easy to play despite its classic appearance, and extremely controllable and accurate as well.”

I guess that quote sums up how I feel about TaylorMade R9 irons pretty well.  Here are a few more details:

All in all, I’d say these irons are sweet-looking clubs with performance to match.  Except for their slightly thicker top lines and their slightly wider soles, they’ll make you wonder if you’re really looking at player’s blades.  In some ways, they’re my “dream irons” – besides looking terrific, they have a large sweet spot due to a low center of gravity and a high Moment of Inertia (MOI).  Because of these characteristics they give you good bit of forgiveness.  But unlike many game-improvement clubs, they’re forgiving without sacrificing anything in the way of performance.  They’re long, accurate, workable and easy to control.  Ball flights are high even on slower swings like mine.

What’s not to like?  I’d buy a set of these irons in a New York second.

From TaylorMade R9 irons to the other golf iron reviews.