Were TearDrop putters at the forefront of putter design technology, or were they a miserable flop? Were they a hit with golfers, or were they just another passing fad? I didn’t know, so I decided to find out.

Apart from the joy of getting to test all types of golf equipment (and believe me, it’s a pleasure!), there’s one thing that’s nice about writing our golf equipment reviews. Almost every day I get to learn something new.

For example, I thought I was pretty familiar with just about every brand and type of putter out on the market. And then someone asked me about TearDrop putters. The name was unfamiliar, and that challenged me to learn what I could about them. Here’s what I found out about the company and its unusual but innovative putters. 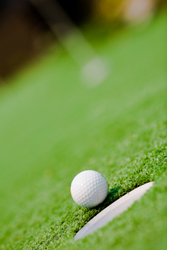 The putters all featured a patented technology which included a unique, “rolled” face instead of the more typical flat face. The company claimed its rolled-face putters were capable of preventing the type of skidding and bouncing rolls that flat-faced putters sometime produce. The purpose of the rolled-face design was to produce a much smoother roll and thereby enhance accuracy and distance control. Well, we all know how important those three characteristics are. But, did the design of their putters work as well as the company claimed?

Apparently so, because players on the PGA Tour, the PGA Senior Tour and the Nike Tour were using TearDrop putters by the mid-1990s, only a few years after the first one came out. In 1995, a TearDrop putter was ranked among the top ten putters (in terms of victories and top-ten finishes) on both the PGA and PGA Senior Tours.

The pros don’t play a club lightly. They can’t because their clubs are the tools they use to earn their living. Their clubs are their bread and butter. And apparently these putters were popular and successful on the big pro tours. So, there must be something to them.

Unfortunately, the company was continually in and out of financial trouble. I’m not even certain if TearDrop Golf still exists or is still making putters. I do know that these putters sometimes go up for sale on eBay, so if you’re interested you can still buy one even if the company has gone out of business.

So, the company may or may not still be making putters. I suspect not, because I can’t find anything that indicates it is. One thing is certain, though. For at least a while, their putters were extremely popular among many high-level golfers.

The company produced several models of putters, but they all featured the roll-face technology. The TearDrop TD-17, the TearDrop TD-21, the TearDrop TD-31, and the TearDrop Select 101 were four of the models, but there were others. They were said to have a solid feel and the perfect swing weight, and they put an immediate forward spin on the ball instead of causing the ball to hop, skip or bounce. As a result, the ball rolled true, along the target line. They were also said to be very forgiving on off-center strokes and have extremely good balance.

This all sounds so good that it would be a shame if the company has gone out of business. TearDrop putters, their precision milling and their roll-face technology truly were at the forefront of golf.

As it turns out, the reason I’d never heard of these putters was the fact that I didn’t start playing golf until well after their heyday in the late 1990s. I asked my husband if he’d heard of them – he’s been playing for more than 30 years. He told me one of his golf buddies used to own one sometime in the ‘90s. He even remembered his buddy telling him it was one of the best putters he’d ever owned.

Even though I’ve never tried one of these putter, I’ve heard and read too many good things about them to automatically discount them. Apparently they were “quite the thing” in the mid- and late-‘90s, when they reached the zenith of their popularity. They were developed to suit any golfer’s putting stroke and put an end to forcing a player to adapt his or her stroke to the putter. The rolled-face technology allowed a golfer to put a pure stroke on the ball whether the hands were positioned ahead, behind or directly over the ball. Putting consistency, accuracy and control were the primary goals of TearDrop putters, and apparently they succeeded.

From Teardrop putters to other putter reviews.