Titleist DT SoLo Golf Balls Review:  Are They Right for You?

Titleist DT SoLo Golf Balls are right for me, unless there's some special tournament going on. For special rounds I put away mine and go to the big guns - in my case, the Titleist Pro V1 or Bridgestone B330-RX.

Some golf balls just match up with my swing better than others. I'm sure the same thing is true for you. What feels like a rock to me might be perfect for someone else. At any rate, I've found that Titleist DT SoLo golf balls aren't the best in the world at any one thing, but on an overall basis they're plenty good enough for most of my rounds. And, they're more affordable than the balls I typically use during important tournaments. So, there's a fairly good chance you'll see me playing with these golf balls if you ever run into me out on the course. 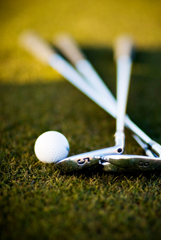 My heart wants me to play Titleist Pro V1 golf balls, because they're probably the best in the business, at least for my swing. My head says I'd be better off with Titleist NXT Tour or NXT golf balls - priced lower than the Pro V1s, they're a nice compromise. My wallet, though, tells me to play Titleist DT SoLo golf balls. They're the lowest-priced Titleist balls out there, but they do have some nice things going for them. I get decent distance with them - about the same as the NXT, more or less - and they're softer and more responsive than many other so-called economical distance balls.

At a street price of around $20 to $25 per dozen (MSRP is $28) they are a bit more expensive than a lot of other distance balls, but do they deliver the kind of performance you're looking for? In other words, would Titleist DT SoLo golf balls be right for you?

These are one of the more popular golf ball brands around the world. Although they're at the bottom of the heap as far as Titleist golf balls are concerned, they're very good at helping golfers get the distance they want while providing a decently soft feel. They're not designed to be used by highly skilled players, but they do accomplish their job. They are, after all, made by Titleist - probably the world's top-rated golf ball maker.

So, what makes these golf balls so popular among recreational golfers?

The Bottom Line: Titleist DT SoLo golf balls aren't spectacular, but they are very good all-around balls. Unless I'm playing in a big tournament they're plenty good enough for me. They're the "poor man's" version of a Titleist, and although they're affordable they perform just as well - if not better - than many of the more expensive balls. They give you distance, durability, soft feel, and a (fairly) low price. And, they're Titleists. They're the cheapest ball Titleist makes, but even so, they're Titleists. 'Nuff said.