The Wilson 8802 Putter Review: One of the Best

Here’s a little-known fact: the Wilson 8802 putter began its life many decades ago, when it was known as the Wilson Arnold Palmer putter. A slightly later version was called the "Wilson Designed by Arnold Palmer" putter. Arnie was at the pinnacle of his career at the time, so there’s no telling how many professional tournaments he won with this particular putter. But, if you had checked a dictionary for the definition of "money club," this putter would have been right at the top.

When Palmer left Wilson (in 1963), the company dropped his name and started calling it the Wilson 8802 putter ("8802" was the putter’s Wilson catalog number). Arnie made the putter famous, but its story didn’t come to an end when he left Wilson. Instead, it went through a number of revisions and eventually ended up in the capable hands of Ben Crenshaw – one of golf’s premier putters. Crenshaw assured the continuing fame of this putter by using it to win the 1995 Masters Tournament. 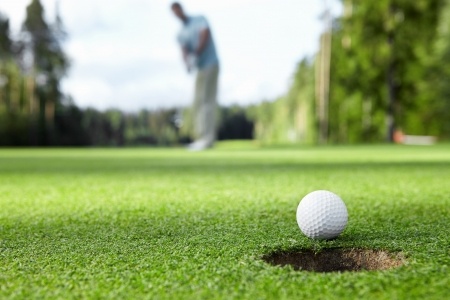 The Wilson 8802 uses "technology" that’s several decades old, but this putter isn’t just venerable – it’s actually venerated as being one of the top putters ever created. And some pundits rank this putter as one of the five most famous putters in golf history, right alongside the classic PING Anser®, the Odyssey Dual Force Rossie 2 Nick Faldo used to win the 1996 Masters, and "Calamity Jane," the putter wielded to great success by Bobby Jones in the 1920s. In fact, it’s possible that the original design of the Wilson 8802 was based on Calamity Jane, which was one of the most successful putters to ever hit the links.

The design of the putter is, by today’s standards, very basic. It has a tiny sweet spot. It doesn’t have any fancy moveable weights or any fixed weight plugs on the sole, and there aren’t any oversized flanges or perimeter weighting to increase its Moment of Inertia. And heel-toe weighting is virtually nonexistent. As a result, the putter can best be described as a "purist’s putter." It’s just a simple, classic, elegant design, but it’s soft, sweet and nicely balanced.

That simple, classic, elegant design has been so successful that over the years, there have been several "remakes" of this putter. Odyssey made one that Phil Mickelson used with great success, but Bettinardi, Cleveland and Scotty Cameron have also created "tributes" to this putter. And Wilson itself is currently selling an "updated" version of the club that it calls the 8882.

Where to Get Your Wilson 8802 Putter

But what can you do if you want an original Wilson 8802 putter? Well, you can fall back on "the usual suspects" that typically work when you’re looking for clubs that are no longer being made. Ask your friends if they have an original one just sitting around in their garage. Go to yard sales. Look in thrift shops. If none of those strategies work, go online. Check your local Craigslist – there might be one available not far from where you live. But www.ebay.com is perhaps the best place to find an original Wilson 8802 putter, and they’re usually available for pretty low prices – I’ve seen them up for sale on eBay fairly often, and the starting price is usually under $30.

There are, however, two things to keep in mind if you want to buy a Wilson 8802 putter on eBay. The first involves the nature of auctions: when the bidding is over, the final selling price of the putter could be much higher than the initial asking price. Set your spending limit to a comfortable level and don’t exceed it. Resist getting caught up in the "heat of battle" and spending more than you planned.

The second concern relates to the possibility that the club you buy on eBay turns out to be a remake and not the original Wilson 8802 putter. You can protect yourself from this possibility (at least to a certain degree) by asking to see as many pictures of the club as possible. In particular, look at pictures of the sole before you bid. If it says "original" on the sole, it isn’t. "The Wilson 8802" should be the only words inscribed on the sole, with "Wilson" in red and the rest in black. The head should not be shiny; instead, it should have a satiny finish. Whether the grip of the putter is original may not be a concern for you (it would be terribly old if it was the original), but the original grip is black leather with a spiraling silver thread. The end cap of an original grip features one red and one blue flag, not the Wilson shield.

From the Wilson 8802 Putter to other putter reviews.