Your first glimpse of an Odyssey 2-Ball putter might be a bit surprising. The large mallet head has a very distinctive design, with two white circular disks positioned on the flange behind the face as an alignment guide. Each of these disks resembles a golf ball, and that's where the name of the putter comes from. 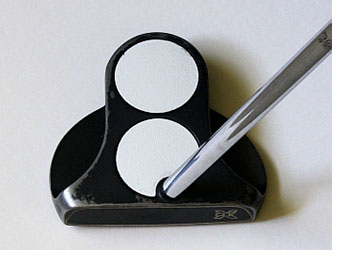 It might take you a while to get used to its size and unusual looks, but plenty of golfers swear by this putter.

First introduced in 2001, the Odyssey 2-Ball putter is still very popular. It's been updated and enhanced over the years, but every model of this putter (White Hot, DFX, Backstryke, Black Series Tour, Divine and so on) has always incorporated the distinctive "signature" design element of these putters - the two white "balls" lined up behind the putter face. At address, the impression you get is of three balls (one real, two on the putter head) all lined up one after the other. The effect is unusual but effective. All those "balls" in a row make alignment a snap. No matter which particular model of 2-Ball you have, the putter almost forces you to visualize three "balls" on a line headed straight to the target.

Annika Sorenstam has been one of the biggest professional proponents of this particular putter. In fact, by using it during her amazing 2002 season (she won a record-tying 11 tournaments) she may have almost single-handedly popularized it with professionals and recreational players alike. But, Annika's far from the only professional golfer who has used the Odyssey 2-Ball putter. Not wanting to miss out on its benefits, countless amateurs have joined those professionals.

I didn't need to borrow a putter in order to write this review. My husband owns one - a center-shafted DFX with the black face insert - and I've played numerous rounds with it when my own putter was misbehaving.

The two "balls" behind the putter face create an incredibly effective alignment aid. With only one exception, I find it easier to line up my putts with a 2-Ball than with any other putter I've tried (for me, aligning the PING Scottsdale® Wolverine® putter is equally easy). Lining up putts is so easy with this putter that you're able to concentrate more fully on the speed.

The DFX model's black face insert is firmer than the white version used in the White Hot Odyssey 2-Ball putters I've tried. The ball comes off the face of the DFX a bit faster, making the DFX model more suitable (in my opinion) for slower greens; if you normally play greens with a Stimp rating of 13, you might prefer the softer, slightly less lively White Hot 2-Ball. I also think the nice "click" the DFX face insert delivers at impact is more satisfying than the muted, subtle sound produced by other models of the 2-Ball putter.

Every model of the Odyssey 2-Ball putter, including the DFX, feels nicely balanced during all parts of the putting stroke. They're also superbly weighted, promoting a smooth, stable pendulum stroke. The roll is consistent, without any hopping or skittering.

The Odyssey 2-Ball putter has a large mallet head. In addition to its looks requiring some getting used to, the putter does have one possible drawback caused by its design. I, along with many golfers, occasionally use my putter from off the green. When you're putting against a collar or from the fringe or light rough, the size of the putter head could cause it to get hung up in the grass during your backstroke. When that happens, your entire putting stroke is thrown out of rhythm and alignment, no matter how careful you are. It doesn't come up all that often and it usually isn't a major problem - it's just a possibility to be aware of when you're using an Odyssey 2-Ball putter from off the green. This isn't an issue just with this particular putter, either. It can happen with any large mallet putter.

The Bottom Line: Aligning the head square to your target line becomes a no-brainer with the Odyssey 2-Ball putter. This is a solid, superbly-balanced, well-constructed putter. If you can get used to its appearance, you'll start draining more putts once you get a feel for how hard to hit it. Any problems you might have with lining up the ball will disappear. Just pick your line, decide how hard to hit it, and then watch the ball drop in.

From the Odyssey 2-Ball Putter Review to other Odyssey putter reviews.