As a general rule, Odyssey putters can be used for many years. So it is with this model.

Introduced in the early- to mid-1990s, these small mallet putters featured such a sophisticated design and high-quality craftsmanship that thousands are still being used today. My own Odyssey Dual Force Rossie II putter is a perfect example of how they have remained popular despite the passage of time. I still use it intermittently, even though I own other, more recent putters. In a sense, it has become "my old reliable" - it's the putter I fall back on whenever my putting goes awry, and it always seems to straighten me out. 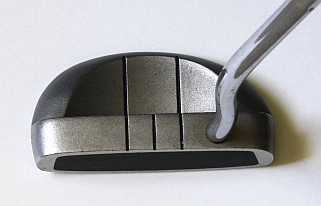 Students of golf history probably already know that long before he was knighted, Sir Nick Faldo won the 1996 Masters Tournament while using an Odyssey Dual Force Rossie II putter. Because of Faldo's success, professionals and recreational golfers began using this particular putter en masse. In essence, his win set the wheels in motion for the creation of an entirely new niche of putters - those that use face inserts. We all know where that has taken us today, and the popularity of putters with face inserts of one type or another is not showing any signs of slowing.

The "Stronomic" face insert used in the putter was Odyssey's original insert technology. By replacing some of the heavy steel in the putter head with a lighter, softer insert, Odyssey developed a deadly-accurate putter with increased perimeter weighting for more forgiveness and a smoother roll. In addition to making the putter more forgiving than many of its competitors, the insert also softens the feel on impact and produces a satisfying "click."

A prominent golf equipment review site (not affiliated in any way with www.checkyourgolf.com or its owners) has ranked this particular putter as the world's most famous putter. In part, their reasoning appears to be based on the fact that Faldo used this putter to win the Masters while Greg Norman was otherwise occupied by his infamous final-round collapse. But if you read between the lines, the main reason they gave the putter such a lofty position was the fact that this now unassuming-looking putter was actually revolutionary back in 1996. In addition to being an early mallet-style putter, this specific putter was the first to ever have a face insert. The race was on: Faldo's win and his putter's revolutionary design created such a craze for the putter that pro shops and golf equipment stores couldn't keep them in stock for months after that famous Master's. Even professional golfers were clamoring for them.

The putter even changed Odyssey itself. Prior to the furor over the Odyssey Dual Force Rossie II, Odyssey was a small, independent putter manufacturer. By the time the dust settled, Callaway Golf had purchased the company for mega-bucks. Odyssey remains a Callaway subsidiary today.

Now, thanks to the Odyssey Dual Force Rossie II putter, almost every current Odyssey putter, along with many of the putters being made by other putter manufacturers, has a face insert. No wonder it's so famous.

Let me share a few personal impressions about this putter, based on years of play and hundreds of rounds.

While it's definitely a mallet putter, its head is much smaller than many of the "pancake flippers" that are being sold today. There aren't any wings, fancy movable weights or peculiar shapes involved. Instead, its understated, elegant design with smoothly rounded lines has become a classic. The black Stronomic face insert is firm but resilient enough to provide useful feedback and a pleasing click on impact. It's nicely weighted, and its superb balance promotes a controlled, consistent swing and pure roll. It even has three subtle, unobtrusive alignment lines to help you start the ball down your target line. If you don't need them they're easy to ignore. Distance control is easy to pick up, and the firmness of the insert helps the putter be effective on either fast or slow greens.

A classic mallet putter that is still competitive after all these years. Used Rossie II putters are available on eBay and other sites online for very affordable prices.

From the Odyssey Dual Force Rossie II review to other Odyssey putter reviews.