Scotty Cameron putters are mentioned in an article about Titleist putters here on the website, but these superb flatsticks deserve their own separate discussion. So, this page focuses specifically on Scotty Camerons.

Here are a few direct links to some of our specific reviews:

I have a lot of respect for Scotty Cameron and his putters. Back in the mid-1990s, Scotty Cameron started creating putters for Titleist. Almost singlehandedly, he began carving out a market for premium putters (those that cost more than $250 or so), and he's never looked back. The day-in, day-out performance of Scotty Cameron putters is so strong that more members of the PGA Tour choose to play them than any other brand. And, they occupy an almost unique niche in the minds of recreational golfers - they represent our aspirations to "putt like a pro" - and look like one by carrying the same brand of putter. Simply put, these putters are said to be exquisite, and many of us want one. 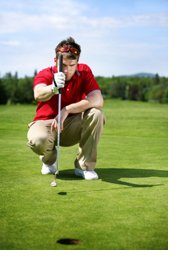 New Scotty Cameron putters sell for $325 or so, and the reputation of these putters is so strong that used models command high prices as well. You can buy a couple of new PING or Odyssey putters (no slouches, either) for the price of one of these babies. Does their performance justify their price? I decided to find out.

Scotty Cameron also makes what he calls his "California" series of putters. Four models of California these putters are currently in production, including blade and mallet-type putters. Like the Studio Select® series, California putter heads are made using a precision-milled 303 stainless steel, although they feature an attractive, bronze-colored finish for glare reduction.

If you're looking for a precision-milled mallet putter, you might want to look into the third line of Scotty Cameron putters, called the Studio Select KombiTM. The head of the Kombi itself is made from a lightweight 6061 aircraft aluminum, while a 303 stainless steel is used for the Kombi-S head.

I recently had the pleasure of trying out the Kombi that my pro shop has on display. I could have tested one of the more traditional Scotty Cameron putters, but I figured it would be more interesting to try the aluminum head version.

The Studio Select KombiTM looks like a sleek, futuristic spaceship with its gracefully curving shapes and bright red alignment lines that are impossible to miss. It's not all looks, however. Three steel weights (located in the heel, toe and back of the sole) give the putter head, crafted of lightweight, precision-milled 6061 aircraft aluminum, the proper weight for a smooth and accurate putting stroke.

This is a high Moment of Inertia (MOI) mallet putter with a solid feel despite its large expanse of soft, lightweight aluminum. I stubbed it every so often until I got used to it, but once I adjusted I thought it had excellent balance. The feel and control were everything I expected from this class of putter. After a few strokes, I started really liking its looks - the vibrant red alignment lines made it easy to start the ball on the line I intended. Even the quirky head cover (typical of Scotty Cameron putters) was appealing.

The Bottom Line: Although it's probably true that a lot of golfers wouldn't spend this much money on a putter, I think the Kombi is well worth it. A putter is the most important club in your bag. Why would you be willing to spend more on a driver than on a club you use for half your strokes in every round? Scotty Cameron putters might cost more than the average, but they give you superb balance, feel and overall performance. Are they expensive? Yes, but in my book they're worth every penny, and they're not just for professionals. Do yourself a favor and try one of the Scotty Cameron putters - you might discover that a $300 putter is a much better value than a $300 driver.

From Scotty Cameron Putters to other putter reviews.