The TaylorMade Burner 420 titanium driver came out in 2002 and was discontinued by the company a number of years ago. Despite its age, however, a number of golfers still play it and others are trying to find a used driver to add to their bag. The days when demo TaylorMade Burner 420 drivers were available are long gone, but I managed to borrow one from an occasional playing partner so I could evaluate its performance for this review. It's a good thing my men-friends don't mind me borrowing their clubs from time to time.

In addition to field-testing the driver, I also did some research on its background and specifications. As its name implies, this driver has a 420cc titanium head. When it was released, this size club head was considered oversized, but it looks small compared to the 460cc models that are now being produced. Designed with a deep club face and a low, deep center of gravity to promote a high launch angle, the driver was also known for the stability of its club head upon impact, a factor which increased its forgiveness on mishits.

For its time, the TaylorMade Burner 420 driver was known for its excellent distance, great balance and high quality construction. Better players reported being able to work the ball easily with this driver. In fact, when it came out, this driver was probably the best, most dependable driver that had ever been designed for mid-handicappers who couldn't afford the top-of-the-line, premium-priced clubs. It even used the same "Pull-Face" technology as the very popular TaylorMade 540 and 580 drivers. So far, my research made it sound like finding a used TaylorMade Burner 420 could be a cheap way to add a fine driver to the bag. 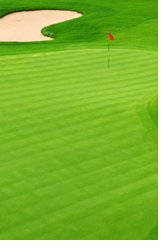 When I started researching this club, I knew that only one person I know actually owns this driver. I know a LOT of golfers, so after I'd finished my research I started wondering why I didn't know more 420 owners. After all, the club sounds pretty solid (and it hits that way too). I would have expected more people I know to be playing it, even though it is getting a little long in the tooth. So I did a little more reading.

As it turns out, the TaylorMade Burner 420 might have been the victim of bad timing, caught in a marketing "crossfire" between the TaylorMade 540, 580 and the TaylorMade R5 driver that was about to be released. So, the failure of this specific driver to capture the market despite its great performance may have simply been a matter of too many other really good TaylorMade drivers existing at the same time.

Okay, enough background about the TaylorMade Burner 420 driver. How does it hit?

Even today, many years after its release, I found the titanium club face to be pretty hot. I can imagine that this was one of the longer drivers of its day, because I got pretty good distance out of it, even when compared to today's drivers. The guy I borrowed the club from tells me the Burner Shaft in the driver I borrowed is the original shaft. At 60 grams, it fits right into the same weight range as many of today's lightweight graphite shafts, but when this club was released it must have seemed like a feather. I like lightweight shafts because my swing speed is only 85 to 90 mph or so, but this one seemed a bit whippy to me. Still, though, it packed some punch.

Because of the slightly whippy shaft, an easy swing helped me achieve straighter drives than swinging away. Alignment at address is pretty easy, and the club is so well-balanced that you always know where the head is throughout your swing.

The Bottom Line: For its time, the TaylorMade Burner 420 titanium driver was a superb club for mid-handicappers on a budget. It still can be, especially for those who don't really feel comfortable with today's big 460cc heads. Its slightly whippy shaft forces you to swing easy, but that's better for accuracy anyway. It's also fairly easy to work, so lower-handicap players might appreciate this club just as much as mid-handicappers. Overall, I was not only pleased with the performance of the TaylorMade Burner 420 titanium driver - I was pleasantly surprised considering its age.