An Overview of TaylorMade Burner Clubs

Need to know about TaylorMade Burner clubs? Along with PING and Callaway, most golfers consider TaylorMade to be one of the "Big Three" in the club making industry. All three companies boast a decades-long tradition of combining innovative club designs and sophisticated technology with superior materials and club-making craftsmanship. As a result, hardly any golfer "in the know" would dispute that PING, Callaway and TaylorMade all make high quality golf clubs.

TaylorMade Burner clubs are a fine example of the company's approach to club making. In fact, TaylorMade has been making drivers, fairway woods, irons and Lady Burners under the "Burner" name for decades, and almost all of them have enjoyed quite a bit of popularity (some more than others, of course). More recently, the company launched TaylorMade Burner hybrids.

The name of these clubs has been echoing throughout the golf world for 20 or 30 years now. So much so, that when many people hear the name "TaylorMade," in their minds, they automatically add the word "Burner" afterward.

A number of different Burner drivers, fairway woods, hybrids and iron sets have been released by TaylorMade throughout the years. Burners have always been known as some of the most innovative, performance-enhancing clubs available. Although they're primarily targeted toward avid amateur golfers, these clubs are no slouches. In fact, a number of highly ranked touring pros, including Jim Furyk, Camilo Villegas, Kenny Perry, Jason Day and Natalie Gulbis, among others, use these clubs when the big money is on the line. 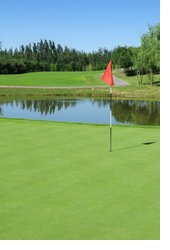 So, golfers who are looking for more club head speed, more forgiveness and more distance have been playing TaylorMade Burner clubs for a long time now. Overall, they launch the ball higher, permit a faster swing speed, and are quite forgiving even with off-center hits. Although even from their beginnings they have provided superior performance to golfers of all abilities, Burners have continued to evolve over the years, though. As a result, the newest models are providing more performance and golf fun than ever before.

Take the company's "SuperFast Technology" as an example of how their drivers and fairway woods have improved over the years. Among other things, this technology uses a large but lighter club head to permit faster swing speeds and maximize distance, "Inverted Cone Technology" to provide a high Moment of Inertia for additional club head stability, accuracy and forgiveness, and a high-quality, lightweight shaft.

Although this particular page of our website is a simple overview of these clubs, I've written much more detailed reviews on several specific types of clubs. For example, the particular driver you use will almost certainly have a significant impact on your game. To help you find one that's suited to you, I review the TaylorMade Burner driver, the R11 driver and the TaylorMade Burner 420 driver. But, I want you to be as well-informed as possible, so I also review other lines of TaylorMade drivers as well as drivers from manufacturers like PING, Cleveland and Callaway, among others.

It's the same with fairway woods - these versatile clubs are important to any golfer's game, so I review several different models, including fairway woods. Hybrids are all the rage now, so I've also reviewed Rescue clubs. And, can you possibly imagine playing a round of golf without using any irons? I can't, because your irons (especially your short irons) are your "scoring clubs." A set of irons that suited to you and your swing can make all the difference. That's why I've written reviews about the irons, TaylorMade Burner 2.0 irons, the Burner Plus irons and a number of other iron sets from TaylorMade and other club manufacturers.

We hope reading our reviews gives you the information that helps you buy clubs you'll enjoy playing for several years to come. These clubs bear an almost legendary name, and the older models are still being talked about. Gosh, the older clubs were so good that a lot of people still use them. Me, for one - I have an older TaylorMade Burner 3-wood that I use almost every day. But, as good as they were, they're still being improved. Read some of our TaylorMade Burner club reviews to learn how and why.