New for 2011: The TaylorMade R11 Driver. For several years now, TaylorMade has been claiming supremacy in the driver market. Its advertisements proudly proclaim that more tour professionals play TaylorMade drivers than any other manufacturer's clubs. And we've all been hearing how much our games can be improved by the company's adjustable drivers. So, when the TayorMade R11 driver came out in February 2011, I decided to see if the hype is justified.

There are three major differences between the TaylorMade R11 driver and the company's earlier R9 model. The most obvious change is the R11's black face and satin white, non-glare crown. TaylorMade says the white paint job is intended to make the club head look larger, make alignment easier and inspire confidence at address. Some people hate it, but others adjust to it after some initial distraction. Some think the white color is a marketing ploy to make TaylorMade's clubs look more distinctive. It didn't make me feel more confident, so I'm wondering why TaylorMade would risk alienating golfers for such a seemingly useless change.

The TaylorMade R11 driver has a 440cc club head instead of the larger 460cc head of the R9 and other drivers from the last few years. The third and most significant change (in my mind) is the use of "Adjustable Sole Plate" (ASP) technology in the club. The older TaylorMade R9 driver already used the company's adjustable "Flight Control Technology (FCT) and "Moveable Weight Technology." ASP is yet another step toward creating a completely adjustable driver. 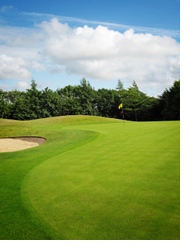 It's complicated to explain, so please bear with me. The FCT system in the driver allows the player to increase or decrease the club's loft in 0.5 degree increments. Every time the loft is adjusted, the spin rate and face angle are also changed. A total of 8 different FCT positions are possible. The MWT in the club allows the player to adjust the club's center of gravity (CG) to promote a draw or a straight ball flight. The new ASP technology gives the player the ability to open or close the face angle at address by two degrees without affecting the club head's loft.

So, after you've used the FCT system to adjust the loft or launch angle, you can tweak the driver even more by adjusting the ASP. TaylorMade calls these three adjustable technologies (FCT, MWT and ASP) the "Three Dimensions to Distance." All told, TaylorMade says the adjustments promote changes in backspin up to 1,000 RPM and changes in side-to-side trajectory of up to 100 yards. However, because the ASP adjusts the sole plate, it won't have any effect if you hover your driver instead of grounding it before your shot.

I intend no offense toward TaylorMade, but I think this driver is overly-complicated, overly-adjustable and overly-hyped. Maybe I belong to the Old School of golf, but please, just give me a non-adjustable driver that suits me. After all, you can't make any adjustments after your round begins - if you do, you'll be violating the Rules of Golf.

I do appreciate the "Aero Shape" of the TaylorMade R11 driver club head, however. The rounded crown "looks" fast and is designed to lower drag and increase club head speed to promote longer hits. That part works for me.

I tested the 10.5-degree club, fitted with the stock 45.75" Fujikura Blur 60-gram graphite shaft. Because this club is so highly adjustable, the only other loft offered is a 9-degree. All the fiddling to adjust everything was aggravating, but once I had it all "right" I discovered that the TaylorMade R11 driver can really bomb it. Most of my drives were straight or had a slight draw, and I liked the trajectory. It's also a well-balanced club, very easy to swing and has a nice "feel" at impact. I just wish I didn't have to spend 30 minutes or more adjusting it to be that way.

The Bottom Line: Once I made all the right adjustments, this was a very long, very accurate driver that produced a nice ball flight. If you have the patience for all the adjustments, the TaylorMade R11 driver offers great customization and could be a good choice. I'll stick with my non-adjustable driver for now, though. I'd rather fix my swing flaws than mask them.

From Taylormade R11 Driver to other TaylorMade Burner clubs.