(This TaylorMade R9 SuperTri driver review was added on Jun 4, 2014)

I’ve said it before in some of my other reviews of TaylorMade drivers, but it’s worth saying again:  TaylorMade makes the “#1 Driver in Golf.”  It’s held the driver count title on the world’s major tours for several years now.

Sure, the pros get paid for using the clubs they do (that would be true for just about any make and model of club they might choose, not just TaylorMade), but they wouldn’t use something that’s rubbish just to make some extra money.  They stake their income and reputation on the clubs they play.  And more of them choose TaylorMade drivers than any other brand.  That says a lot about TaylorMade’s quality and performance. 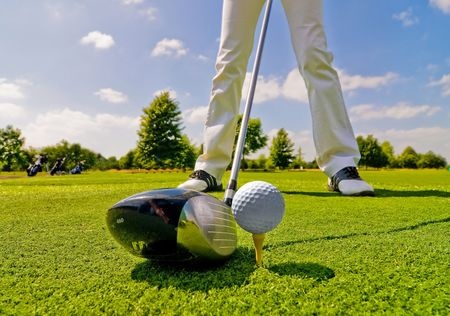 Because this driver has a black crown and face (the regular R9 driver’s crown is black but the face is silver), it looks quite sleek at address.  Plus, the face is so big and deep it’s hard to think it’s possible to miss the sweet spot.

Despite the differences in head size and face color, there’s a major similarity between the original and SuperTri versions of the TaylorMade R9.  Both drivers use the company’s superbly successful Moveable Weight Technology (MWT) and its adjustable “Flight Control Technology” (FCT).  The MWT system lets players adjust the head’s center of gravity by repositioning its weighting.  The FCT’s adjustable hosel lets you alter the head’s loft, lie and face angle.

So what’s the difference between the TaylorMade R9 SuperTri driver and the original version of the R9?  Because it includes both systems (MWT and FCT), the SuperTri is the company’s first fully adjustable club that features a more forgiving, confidence-inspiring 460cc head.

One of the differences between the two clubs is that the R9 SuperTri driver makes more widespread use of the company’s “Ultra-Thin Wall” technology, enabling the head to be larger but lighter.  Other differences include improved aerodynamics and the addition of TaylorMade’s “Inverted Cone Technology,” which raises the SuperTri head’s Coefficient of Restitution for faster ball speeds and more distance on off-center hits.

In fact, forgiveness is one of the strong points of this driver.  It has all the advantages of the original R9 driver – adjustability, control, distance, workability - but the SuperTri gives you a larger head, more confidence, and more forgiveness.

Once I got my test driver out on the course, I quickly discovered that the SuperTri is super easy to hit.  Using the stock settings for the FCT and MWT, almost every ball I hit was long and straight, even on most of my miss-hits.  And once I adjusted the club to give me the trajectory and slight draw I wanted, I was really off to the races.

But that brings me to one potential downside of this club that’s shared with the original TaylorMade R9:  full adjustability can mean a lot of fiddling, at least initially.  With 24 different combinations possible, it can take a while to find exactly the right setup.  Combined, the FCT and MWT systems give you 3 degrees of launch angle adjustability, up to 75 yards of left-to-right adjustability, and as much as 1800 rpm of spin adjustability.  You can adjust this club to give you a hard draw, a high fade or just about anything in between.  Like I said, finding the right settings can take some time, but in the end I thought it was well worth it.

The stock shaft of this driver is a 60-gram Fujikura Motore graphite model.  It’s a good shaft for people with slow to average swing speeds, but players with fast swings might overpower it.

The TaylorMade R9 SuperTri driver seemed to give me a little higher launch and a little more spin than I got with the original version of the R9.  If that’s not an aberration, it means the SuperTri might be better suited to average players than the regular R9.

Unlike the original R9 driver, the TaylorMade R9 SuperTri driver is a club for the masses.  Many average players need some forgiveness but still want to adjust their club’s loft, lie and face angle to give them the best chance at hitting the shots they want.  Mr. Joe Average Golfer, I’d like to introduce you to the R9 SuperTri.  It’s a hit in my book.